A Snapshot in Time and A Celebration of Our Future

Los Cenzontles has recorded 20 albums since 1994. Each is a snapshot of a moment in time. Some revive rare traditions like the traditional mariachi and pirekuas of Michoacán. Others celebrate thriving traditions like rancheras.  Yet others mix styles such as our Son Jarocho collaboration with Cuban masters El Goyo Hernandez and Lazaro Ros of Cuba.

Our newest album, Regeneration, is rooted in the Mexican-American experience. I wanted to create songs that fuse Mexican folk forms and rhythms with American and Latin pop and rock sensibilities to match the times we live in. The past twenty years have seen some of the biggest demographic shifts in America in modern times. Los Cenzontles Mexican Arts Center is growing right along with these changes. . Culture is always in flux and if you want to keep relevant you have to morph with it. That is the fun of it. Change is part of our DNA.

We find that our younger fans have eclectic tastes, but they are also steeped in Mexican music like Vicente Fernandez and Banda Recodo. Most say they do not want to listen to the music of their parents, but they know it anyway. It is inside them somehow. The trick is to give the music back to them with an open window. One of our teen   students remarked that Los Cenzontles's music is not traditional -- it's  fun!  So this new CD is an homage to the new generation, seeking fun and escape and meaning.

But many in our country today do not celebrate our Latino-infused future. They fear it. So I look back to the last major generational shift when the baby boomers came of age in the late 60's and early 70's. There was plenty of difficulty in those days, but the economy was buzzing and the generational shift was largely White. This new one is much less so, with Latino youth being the fastest-growing group in the country. And there lies the conflict. Limited resources and an aging white population wary of the upcoming young brown one.

Regeneration is a celebration of hopes and unified visions.  It may yet happen, at least in song. 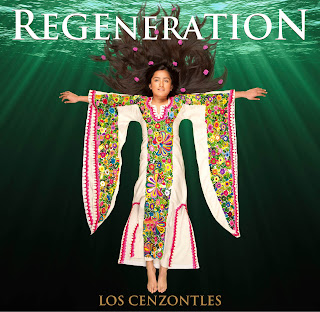 Posted by Eugene Rodriguez at 7:32 PM

Eugene Rodriguez
Eugene Rodriguez received a Master's degree in Classical Guitar performance from the San Francisco Conservatory of Music. He is an US Artist Oliver Fellow. He formed youth group Los Cenzontles in 1989 through an Artist Residency from the California Arts Council. In 1991 he established the Fandango Project to promote participatory music and dance in the SF Bay Area with support from the US Mexico Fund for Culture, Bancomer and the Rockefeller Foundation. He incorporated Los Cenzontles Mexican Arts Center Arts Center in 1994. In 1995 he was nominated for a Grammy for Best Musical Album for Children for his production of Papa's Dream, a bilingual recording with Los Lobos and Lalo Guerrero. He has produced eighteen CDs for Los Cenzontles. His productions have included noted musicians Linda Ronstadt, Ry Cooder, David Hidalgo, Taj Mahal, Elvin Bishop, Raul Malo, Pete Sears, among others and has collaborated with The Chieftains, Los Lobos and many others. Eugene has played a pioneering role in the revival of Mexican folk music in California and has innovated adaptations of traditional pedagogy to suit contemporary urban contexts.